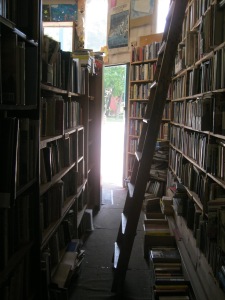 I first discovered this bookstore the last time I was in Toronto, last Christmas. I was strolling around downtown (and when I say “strolling”, read “battling through the wind and snow on streets I could barely see through the tiny slit I had left exposed between my hat and my scarf”)  looking for a Christmas presents.  Ten Editions is on the corner of Spadina and Sussex Avenue, the latter street name providing yet another subtle reminder that this country is basically a small-scale copy of Europe, made up of counterfeit versions that are always smaller and worse than the originals.  But this bookshop is fantastic and very nearly redeems my faith in a continent that has largely lost all of its charming, characterful bookshops to big box giants.

Now this is a proper bookshop, the books-from-floor-to-ceiling kind.  When I was a child I imagined that my future house would have books all over the walls and the floors and on every available surface and no one would ever tell me to pick them up. Being in Ten Editions for half an hour today somehow satisfied that need for chaotic beauty.  I think the thing that first got me hooked were the ladders.  Remember that scene in Beauty and the Beast where she goes into the bookshop and jumps up on the wooden ladder which slides across the shelves?  (If not, you have no soul and need to re-watch Beauty and the Beast.) Anyway, it’s exactly like that; a big wooden ladder that goes from the floor to the top of the bookshelves (which go pretty much to the ceiling) and  a metal bar that the ladder slides along from one end of the shop to the other.  It took a great deal of self-control not to jump up on it.  In fact, there was even a book I wanted which was high up and would have given me the perfect excuse to do exactly that, but I started to feel socially awkward and chickened out at the last minute.  Instead I looked around at the many many second hand books while remaining on the ground like a good girl.  The books were all in great condition and I imagine you’d be able to find just about anything you’d need in there.  There were also shelves upon shelves of antique books, a box of almanacs from the 20s that looked like they’d crumble if you touched them and, excitingly, an early edition of  The Bobbsey Twins in the Country by Laura Lee Hope which was given to a little girl named Patsy for Christmas in 1943.  I could happily spend an entire day browsing through the shop’s literature, history, biography, psychology, poetry, children’s books, crime, drama and classics shelves and its little bit of medieval poetry.  This place is heaven.
The shop is owned by one woman who sits behind her desk all day.  I don’t know her.  But I love her.  Last Christmas, as I was poking around the poetry section in the back room, I heard the door open and peeked through to see a young man with too-low trousers, one of those moronic trucker hats and giant headphones barge in and walk straight up to the woman at her desk.  He took his headphones off but left the  loud (and bad) music blaring while he abruptly stated the name of the author whose book he was looking for.  She looked puzzled (and I imagine this is a woman who doesn’t often look puzzled) and said she hadn’t heard of the writer and asked what kinds of books she writes.  He answered “It’s like…those vampire books!” in the most clueless voice, as if his question were the most obvious thing in the world.  The owner scrunched up her nose and said “You won’t find that kind of thing here.  Maybe you should try one of the bigger bookstores” and gave him a look that said he should be ashamed to be alive.  He exhaled rudely and strutted out as if he didn’t know he was the scum of the earth.

Anyway, today she was much more cordial.  I bought The Complete Poems of Allen Ginsberg 1947-1997 for $8.50,  which, for such a giant book (just over 1200 pages) was quite a bargain since the retail price was $29.00 when it was published in 2006.  The owner laughed as she looked at it and said she couldn’t believe the complete poems of Allen Ginsberg formed such a massive book, since she tends to think of him as someone who just wrote a couple of very important poems.  I laughed and said that the size of the volume probably would have surprised Ginsberg himself and felt very clever until, leaving the shop, I realised that that was the exact line John Ashbery had once used to describe Frank O’Hara’s Collected Poems.  And then I was thoroughly embarrassed since I’m sure this woman knows that the line wasn’t mine.  In my mind, this woman knows everything.