I’ve always had a bit of a hard time with the expression “don’t judge a book by its cover”. Of course, I know that it’s talking about people, not books, but I still think books are an odd place to look to for this kind of sentiment. Surely, as readers, we do judge books by their covers, because if the individuality of each edition and each individual book and the degree of love and wear it’s had didn’t make any impression on us, we’d all be reading off our Kindles, where every copy of every book looks exactly the same. Thankfully, we’re not.

However I’ll admit that Pages of Hackney is a perfect example of the spirit of this phrase. It doesn’t really look like much from the outside. The shop is small, it’s not immediately evident that it’s a bookshop and, in a sympathetic way, it looks a little bit tired. But on the inside, you see that it has a bit more energy than you thought. The shop hosts book talks, readings, debates, film screenings and the occasional photography exhibit. Who knew? 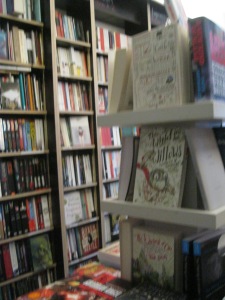 Despite its small size, the shop manages to cram in an amazing selection of books.  On the ground floor are the new books.  There are many contemporary and classic fiction books, which are all in very good order, although it seems like many have been taken out, admired and put back in odd places, but I think it’s nice that the staff aren’t obsessively trying to straighten up the shelves.  I like a little mess sometimes.  My favourite thing about these shelves though is that in addition to the usual announcement that we are in the “Fiction” section, the chalk writing on the tops of the black bookshelves sometimes labels them “tall tales” and “yarns”.  I wish I knew more about the people who work here because they seem to really enjoy playing with fun and bookish ideas.

There are poetry, travel and culture sections, as you’d expect, and a relatively

After a nice long look through the novels (and an envious flip through the hardcover edition of Philip Pullman’s new Grimms’ Fairytales which is so beautiful but so expensive!) I migrated down to the basement and its incredible collection of second hand books.

and an armchair, as well as a tiny child-sized piano (the keys don’t work, I tried), which makes you feel a bit like you’ve accidentally wandered into Alice Liddell’s living room.  Once I got over the strangeness and started to peruse the shelves, I realised that there was something magical about this poky little basement.  There are just so many books!  Just when you think you’ve come to the end of them, you notice there’s a table in the corner covered with them and under it another box-full and behind it yet another.

But it’s not just the number of books that’s amazing.  The books on offer are beautiful and interesting.  I found a Chinese novel (I hate that I can’t remember the name!) written in English for the Peking Foreign Language Press.  Inside it was tucked a little brochure with a family tree of the main characters and a beautiful Ex Libris label on the front leaf with a hand-written name.  It came in its own case and cost only £3.  I wanted it so much, but had a hard time justifying the purchase, so I had to leave it.  There was also a lovely old edition of Middlemarch with beautiful illustrations and the smallest print you could imagine and loads and loads of vintage children’s books.  One of the walls was entirely covered by Penguin and Puffin Classics paperbacks.  A huge variety of titles were represented.  In this section there was, by coincidence or design I don’t know, a huge number of D.H. Lawrence novels.  I bought The Rainbow, one of Lawrence’s earlier novels, for £4. I haven’t read it before and I seem to vaguely remember it having some kind of connection to Women in Love.  I’ll read it and let you know.  I also dragged my boyfriend along with me today (not that it was that hard) and he bought a £3 collection of essays by Jon Stewart.  Brilliant. Anyway, what amazed me most about this bookshop was just how inexpensive all the second hand books were; some were so beautiful that paying a measly £3 or 4 felt like stealing. I think Pages has struck a perfect balance between the modern publishing industry upstairs and the joy of used books in the basement.

In addition to The Rainbow, I also picked up something very exciting; a map of London’s independent bookshops!  Some I’ve already written about , others I’ve been to and want to write about, but there were many I had never heard of, which means that now I have even more ammunition to throw into my anti-Amazon revolution!

And boy do we need a revolution.  In the bookshop today, there was a little girl, probably four years old.  She had picked up one of the second hand children’s books and was holding it softly, like the treasure it was.  She asked her parents if she could buy it and I think her heart and mine broke when they said no.  It reminded me of a time when I was working in a bookshop and a little girl dropped her fuzzy pink purse on the ground because she was walking around with her face buried in her book.  Her mother scolded her for not taking better care of the purse and said “It’s like all you care about is that book.”  I couldn’t believe it; that kind of behaviour from little children – especially little girls – should be praised and encouraged, not criticised!

I know that sometimes books can be expensive.  But isn’t that all the more reason that we have to make sure that we protect not only bookshops like this, but also our public libraries?  I’ve been  told that digital readers are a good thing because ebooks are cheaper and thus, by some kind of logic, an equalising force.  I can’t believe someone is trying to defend ebooks by this kind of weak moral argument.  The truth is, in this day and age, it’s not difficult for children to get their hands on books.  I don’t know about you, but it seems to me like teachers and librarians and parents and siblings and every adult in their lives wants children to read more.  The issue is inspiring the children, and from personal experience, being the keeper of a book is the best way to learn to love them.  Being given the responsibility to care for a beautiful book, whether borrowed or bought, teaches a little girl that books are important, sacred, but most importantly hers.  It shows that she has the ability and the right to access this magical world of knowledge and imagination and creativity. I truly don’t believe that there’s any greater educator than that.

15 responses to “Pages of Hackney”