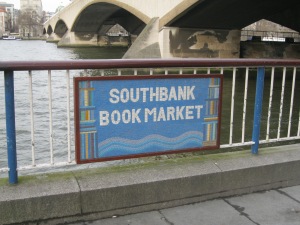 In a world where few possess the patience for browsing and laziness-enablers are everywhere, I’m worried about a lot of bookshops.  The Southbank Book Market isn’t one of them.

Okay, technically it isn’t so much a bookshop as a bookspace.  But you know what, last week I wrote about a boat with books in its belly where cats like to lounge and everyone talks like a pirate, so the rules have apparently been thrown out the window anyway.

The reason I have no doubts that there is a place in London’s future for the Southbank Book Market is that it is, in every way, so London.   One of the city’s best-kept secrets, it is situated on the south bank of the Thames. Vaguely 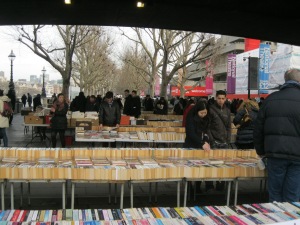 reminiscent of the world-famous book stalls that line the Seine (my second-favourite European river), the market partakes in the quintessential London tradition of amazing things that just kind of pop up out of nowhere while you’re passing through.  Of course, it is located in one of the best parts of London to idly pass through, with its famous neighbours like the London Eye to the West, the Oxo Tower to the East, Royal Festival Hall, the Hayward Gallery, the National Theatre and the BFI.  In other words, some pretty good company.

Walking out from Waterloo station towards the river today, I was approached for directions (twice), saw several street performers, cut through the Food Market which smelled delicious, peeked into the windows at Royal Festival Hall to see if any spontaneous afternoon choral performance was going on (it happens!) and

got lost in a crowd of clowns.  And I’m not even joking.  The place is always buzzing with life and you never know what you’re going to find there.  One time, I came across a giant vat of soup that some company or another was giving out for free to everyone passing by and despite but also because of the absolute randomness of that moment, it sticks in my head as the quintessential London moment.  Because this city is about the exciting things you don’t go looking for, but which find you anyway. The Book Market is situated in the perfect spot for the serendipitous pass-by and at all times of the day it’s flooded with idle wanderers, readers on their lunch breaks, aspiring photographers, students, tourists and a whole assortment of the other people who wander London’s streets.

There are probably about ten long tables laid out in a row underneath Waterloo Bridge which comprise the book market.  And books cover every inch of all of

them.  A ring of books standing up on their sides goes around the edges of each table and in the middle, some books are laid flat, given more of a spotlight.  I’m not actually sure what the logic is in the choice of books that go in the centre; some are antiques or special editions, some are particularly beautiful or unique books and some are just really odd.  For example, an outdated Encyclopedia of the World’s Rivers; useful, I’m sure, but just a bit random.

What I love most about the book market is that there are so many different kinds of books.  Mass-market paperbacks are all over the place and there’s a huge (if eclectic) selection of science fiction, fantasy and crime paperbacks.  There are also the classics in many different forms, ranging from Wordsworth Classics (code among English students for ‘the cheap edition’) to first editions thrown in there somewhere if you’re lucky enough to spot them.

There doesn’t seem to be any particular organisation system either, but trying to figure one out can actually be a lot of (very geeky) fun.  As you make your way around the stalls, craning your neck to read the sideways titles, patterns appear

to form.  It will seem, briefly, that maybe all the Penguin classics are in a line here and all the Pelican classics are beside them, sometimes they might even be vaguely in alphabetical order until you find a sequence of books that goes something like “Atwood, Byron, Conrad, Dickens, The Unauthorised Guide to Twilight, Eliot…” and you realise organisation was a foolish dream.  To be honest, it’s a bit disconcerting to see A Portrait of the Artist as a Young Man slotted in next to something called From Notting Hill With Love…Actually.  I honestly saw this title and thought it was a parody. Then I hoped desperately that it was a parody and when I realised it wasn’t I fell to the ground and wept.

(A side-note on ‘chick lit’: I seriously resent the implication that this kind of book is literature in any, even an abbreviated, form and doubly resent the assumption that it appeals to the female condition.  Real Women’s Literature is Virgina Woolf.  It’s George Eliot and Sylvia Plath and Katherine Mansfield and Jane Austen but only if you read her for her social commentary and wit instead of her hunky heroes.  And it’s a side-order of Judith Butler and Elaine Showalter. Anyone who says differently is just plain silly.) 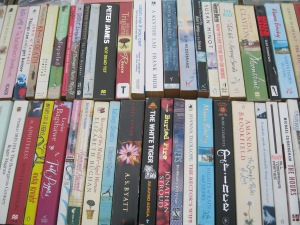 Anyway, back to the books.  Some particularly exciting finds today were a 1968 copy of The Adventures of Pip by Enid Blyton going for £6 as well as a couple of other old copies of children’s books, including Blyton’s The Adventures of Binkle and Flip (what a title!), a 1954 novel Jack of the Circus by Frank Richards and another called Tom Merry’s Triumph, also by Richards. They were old books with beautiful covers and illustrations and all so cheap!

I walked away very excited about the two books I bought.  The first was The Heat of the Day by Elizabeth Bowen and it was a lovely old hardcover edition from 1950.  When I saw that I got really excited because I thought it might be a first edition (I knew it was published shortly after the end of the war), but the first edition was in 1949.  Curses!  But still, a very exciting purchase and for only £3. I was going to resist, but the deciding factor for me was that when I held it up to my nose and sniffed it smelled absolutely delicious and I think once you’ve done something that intimate with a book you can’t really leave it behind.

The other book I bought was Our Mutual Friend by Charles Dickens, another old hardcover from 1956. It was actually part of a set of the complete works of Dickens and they were all only £2.50 each, reduced because there was an ex libris in each one and a bit of scribbling in the corners.  Personally, I’d be willing to pay a bit extra for marginalia, but if they want to charge me less, I won’t argue.  As much as it pained me to separate this beautiful book with gorgeous illustrations from the rest of its family, I convinced myself it would be okay.  With the cold weather in London lately I’ve been feeling the need to read either Dickens or something Russian.  I’m about halfway through Nights at the Circus by Angela Carter at the moment and fabulous as it is, it’s just not fulfilling my snowed-in-feeling quota the way Dickens always does.

So I spent £5.50 on books.  Oops.  But I feel okay about it because my purchases are such precious books that I would gladly have paid a bit more for them.   After paying, I started to wander around a bit more, just to make sure there wasn’t anything I’d missed.  After about two minutes of this I realised I was going to have to call it a day and drag myself out of there, because I kept seeing books I wanted to buy and knowing that they were all cheap enough that I could justify it!  It’s a dangerous game, buying books at the Southbank Book Market and, feeling that I hadn’t the required strength of will,  I had to reluctantly withdraw.