Now this, my friends, is a proper bookshop.  Housed inside a beautiful Tudor building (or maybe Tudor revival, but I’m not fussy), The Broad Street Book Centre is at the centre of Hay and its dimly-lit windows, wooden floorboards and

display of books in the front window draw in many aimless wanderers off the street.  Each inch of wall space and lots of the floor space too is covered with beautiful rare and secondhand books, just waiting for you to come and pick them up.  Many of them are so old and frail, with thin pages, crumbling spines and delicate gold-leaf, that it almost feels unfair to disturb their rest on the walls by picking them up.  But fortunately, the overwhelming message that the shop sends is that this is a place where adventure is allowed, so explore on! 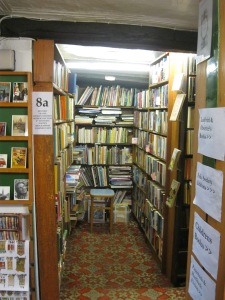 The shop basically consists of what feels like a never-ending string of rooms, which are labelled in the most mystifying system I have ever seen.  I’m sure it makes sense for the owner of the bookshop to say ‘Ah yes, this book needs to go to section A in Room 8b’, but to the average browser, it’s not very helpful.  It is however, charming, so I’ll allow it. And it makes the shop feel a bit like a labyrinth, one where an alternatively benevolent and sadistic overlord gives you hints on how to leave which you never know if you should trust or not.  But the joke’s on him because I’m not trying to leave.  I had to be dragged out in the end, with the gentle admonition that if I spent as much time in every bookshop in Hay as I did in this one, I’d never get through all of them.  Which, in the end, I didn’t.

But if you find yourself scratching your head as  you try to get your head around the somewhat chaotic collection of rooms and books as you make your way through the labyrinth, try to enjoy being lost.  Wandering, in shops like this one, invites a certain wonderful phenomenon: serendipity.  Secondhand

bookshops are one of the best places in  the world for serendipitous moments to happen; indeed, I don’t think any other kind of place is better suited to creating that ‘Well would you look at that!’ feeling.  And that feeling is one of the best feelings we can ever have; it reminds us that despite our efforts to micromanage and control every moment of our days, the world and all its magical possibilities still have the power to surprise us.  It’s a feeling that sadly is becoming less and less common as we not just lose, but freely give up, our ability to accept the random, the unplanned and the unexpected.  Fortunately it is still allowed and even fostered in secondhand bookshops like this one.

One of my favourite rooms in the shop to rummage around in held the children’s section, Folio Society Editions and modern novels. The children’s selection had lots of the contemporary favourites – Harry Potter, Narnia and other secondhand copies of our favourites – but also had many beautiful hardcover children’s books from the 30s and 40s that have been forgotten, including some titles by Enid Blyton that I had never heard of (although I also heard lately that the wrote over 600 children’s books – can you imagine?!) and some very dated storybooks for girls and boys.  The section was colourful and the light from the window just above it made for a bright and pleasant reading area, with a little wooden chair perfect for storytime gatherings, should some ambitious parent decide to try.  On the 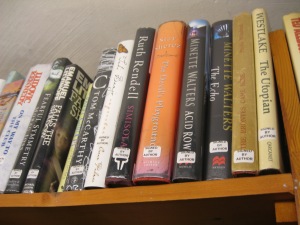 opposite wall was a brilliant collection of modern first editions, featuring books by writers like Ian McEwan, Margaret Atwood, Kazuo Ishiguro and all the other darlings of contemporary fiction.  A small selection of these first editions were actually signed by the authors, so they will have been much more expensive, but the rest of the books were affordable.  I would say that for the average paperback novel, you could expect to pay about £5, though many were cheaper than that and a great many of the beautiful rare books were much more expensive.

The final wall of this room was covered in Folio Society Editions of everything from Shakespeare to Chaucer to Arthur Conan Doyle to Emily Bronte.  Some were more expensive than others, again, but most were around £20, making them the perfect gift even if buying one for yourself feels a bit extravagant.  As regular readers know, I love the Folio Society and should probably not go on about them as much as I do, but I will say once again, that they are perfect as presents, particularly if you want to give someone a special copy of a book they love to be kept in a place of honour on their bookshelf.

The shop also has a brilliant collection of CDs, sheet music, history, politics and poetry books and a room that is full of books about the railways.  Because why not, I guess.  I very much doubt that there is anything you couldn’t find in this bookshop, that there is any booklover whose ideal birthday present isn’t lurking at the back of one of its shelves.  And if you’re looking for serendipity or book fate (something I had a great chat about with a bookseller at Richard Booth’s Bookshop – coming up!) this is the place to go.  You’re sure to find a new book, or author, or even genre that you’d never heard of before but won’t be able to get out of your head.

Which brings me to ‘the one that got away.’  In the fiction section near the front of the shop, I gasped out loud when I discovered a small early edition of Andrew Lang’s The Blue Fairy Book.  This is the first in the Scottish writer’s series of twelve books of fairy tales, which collect famous stories like Aladdin and Sleeping Beauty with more obscure ones from all over the world.  This book had

a blue hard cover, gold  leaf pages, and a Happy Birthday inscription on the front cover.  And it only cost £6.  Unfortunately, knowing that I had already spent too much money on books on my little trip to Hay, I decided to leave it.  For now.  In a way, seeing it there was more precious to me than actually taking it home.  When I was a little girl I used to take Lang’s Fairy Books out of the library at school after our kind  school librarian suggested one to me and I became completely hooked.  I would borrow them week after week until I had read all of the ones we had in the library several times. And I hadn’t thought about that in about ten years.  Like so many other childhood memories, reading those books has probably formed my personality in many ways and I doubt I would be the person I am without them, but they had slipped into the dark recesses at the back of my mind.  Until, as if a bit of fate or serendipity had followed me all the way to Wales, I saw them sitting on a shelf in the Broad Street Book Centre, and precious memories from years ago came flooding back.