Libreria is that rare thing: a new London bookshop! While around the country – indeed, around the world – bookshops are closing down, it’s encouraging to see a new one pop up just around the corner from London’s Brick Lane. I went to visit yesterday, a sunny Sunday afternoon. After seeing a mention of the bookshop in the Guardian a few weeks back, I decided I’d like to see for myself.

What I saw has left me feeling a bit, well, confused.Walking in with very few expectations I was immediately impressed by this bookshop. I then made the mistake of doing an online search for Libreria when I got home, and reading a few things about the bookshop has left me with mixed feelings. But more on that later; there is more than enough to say about a visit to Libreria.

When you walk into Libreria, it takes a second to get your bearings. Because of the gentle curve of the space

and the mirrors on the ceiling, the shelves, which are already packed to capacity with books, seem to carry on forever in every direction, including upwards into the sky. You can only stand there for a moment, stunned, while you take in your surroundings and internally map out the beautiful wooden shelves, painted a welcoming bright yellow. Throughout the shop are little reading nooks where you can sit and admire the books. In some bookshops his would seem a bit gimmicky, but here they are not just helpful, but perhaps even necessary. With every surface – vertical, horizontal and diagonal –  absolutely buried in books, I was often grateful for the ability to sit down in one of these little nooks and take a breath while I examined a book or tried to get my head around the layout of a particular section.

The selection of books is well-informed and interesting. This is not a place to get in and get out with a Le Carre novel, but it’s perfect if you’ve got a bit of time on your hands and want to find something new. Its real skill is in creating excitement about a new book. I love the feeling when I find

something new that I need to snap up immediately, then rush home to turn it over, touch the cover, smell the pages, read and reread every word on the outside and crack it open to start reading as soon as possible. At Libreria, that ability to discover something exciting and inspiring takes precedent – and quite rightly so – over navigability. Rather than a simple ‘Fiction A-Z’, the shelves in Libreria meander in and out of logical order, more in keeping with the way your eye moves along a shelf of books anyway. Every now and then there is a vague sense of alphabetisation for a little while as you scan a row of books, but this can disappear suddenly and inexplicably, morphing into a completely different part of the alphabet or an entirely new system of ordering, so I quite quickly gave up trying to impose my own ideas of what should come next.

The sections in this bookshop are not titled ‘Fiction’, ‘Non-Fiction’, ‘Art’ and ‘Philosophy’. Instead you’ll find ‘Ways of Seeing’, ‘Enlightenment’, ‘Mothers, Madness and Whores’ or ‘The Future of Life and Death’. Yes, that does sound a bit pretentious. Of course it does.  But I think it’s always useful to have our notions of genre disrupted, and it’s fascinating to group books together in different and surprising ways. This system also makes it really clear from the outset that there is no point looking for something specific; on this journey you are in the passenger seat, being driven wherever the bookshop wants you to go, rather than where you think you should be going next.

Among the interesting and unexpected places I was taken were:

and Shami Chakrabarti. Chakrabarti’s choices were fascinating and included The Arrival, a beautiful graphic novel about migration by Shaun Tan. We ended up buying two books: The Witches: Salem 1692, a satisfyingly thick history book for £20 and the Selected Stories of Sylvia Townsend Warner, of whom I hadn’t heard before but whose stories sound irreverent and powerful and focus on ‘the oddities of love.’ This set me back £18, which seems a lot for a paperback. And obviously I’m not comparing that with Amazon, but with other independent bookshops of a similar calibre who provide excellent service and a delightful experience, but without taking the piss on prices. Still, in the scheme of things, this is a small price to pay for an hour spend in Libreria and two amazing books.

When I got home and sat down to write this piece, I decided to find out a bit more about Libreria and how they see themselves. I often do this before writing about a bookshop because I like to know whether a bookshop has a particular speciality or a nice story or an inspiring mission statement that I can include when I write about them. So I googled Libreria. It’s had quite a lot of coverage since opening and the tone of much of it is pretty irritating. For now I’ll give Libreria the benefit of the doubt and assume it’s just the press that’s taken such a frustrating view of this opening. While it’s really heartening that the opening of a new bookshop has been met with any interest, a few articles have described it in a way that makes it sound like it was founded on the whim of its creator who wanted to do something a bit quirky and kooky. It’s described in this particularly wanky article as a ‘concept bookstore in east London’. What does that even mean? Libreria, according to its acolytes, is special because it aims to be a quite space away from information overload and incessant noise and does this by providing a carefully curated selection of excellent books.

I fail to see how this makes Libreria any different from any other good bookshop. I don’t 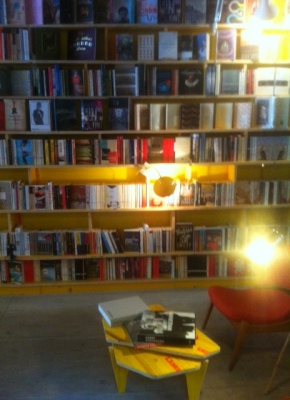 deny that it’s a brilliant place, because it’s a space in which you can leave behind the noise and information overload of the outside world and instead focus on books alone, in a setting that allows for creativity, spontaneity and discovery. This is wonderful and necessary, but it’s hardly some super creative new hipstery thing that no one’s ever thought of before. It’s just…a bookshop. That’s what a good bookshop is, and what it does. The self-congratulatory tone of a lot of the press coverage makes it sound like they’re the first ones to hit on this totally quirky and twee idea. This feels a bit insulting to bookshops like Brick Lane Books, a few minutes down the road, which has been a stalwart of the community, providing the same service (if not a better one, as they work hard to engage the community in reading and literature) but without banging on about it, for over thirty years. It’s a bit insulting to all the booksellers and booklovers for whom a good bookshop isn’t a novelty or the quirky retro Instragram fad of the week, but a treasured (if underappreciated) part of life. I’m sure the folks at Libreria are aware that they are the latest, but by no means the first, brilliant bookshop in London. So I’ll chose to ignore the pretentious think pieces and just let a good bookshop be a good bookshop.

The idea of a safe, clean, quiet place where you can go inside and have respite from the world around you while getting lost with books is a great one, and one with a long tradition of libraries and bookshops. I applaud anyone setting up a new bookshop like this, particularly one as truly unique as Libreria. This place is a haven and I’m so glad London has another beautiful bookshop, with a bold and creative selection of books that invites you to experiment and learn, and enables the magic of stumbling upon the perfect thing.